The seeds of PathCheck were planted early on in February of 2020. At a medical conference on COVID-19, MIT Associate Professor Ramesh Raskar met Riddhiman Das, Steve Penrod, and Greg Storm of TripleBlind—a platform that specializes in techniques for privacy-by-design machine learning. Together, both parties had the idea to create a privacy-first contact tracing app to slow the spread of COVID-19. After brainstorming ideas through text messages, the TripleBlind team arrived at MIT in early March to get to work. The idea would eventually result in the PathCheck Foundation: a nonprofit that brings together two free, open-source, mutually supportive, original technologies that support public health contact tracing solutions: COVID Safe Paths and Safe Places. 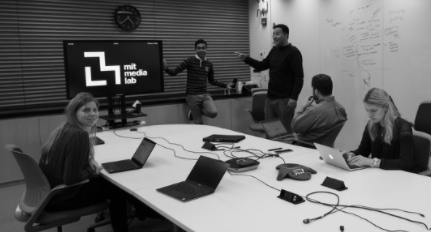 In the beginning, every member consistently contributed 80 hours each week to launch this idea. Traditional responsibilities were put on hold (whether that be research at MIT, coursework at Harvard, or our traditional jobs) in order to dedicate using the collective expertise to slow the spread of COVID-19, while maintaining privacy and individual liberty. Additional collaborations with Stanford University, SUNY Buffalo, Mayo Clinic, the Massachusetts General Hospital, the World Health Organization, the US Department of Health and Human Services, and the Graduate Institute of International and Development Studies developed. The team also quickly built its volunteer base—with over 50 volunteers, spread across research and technology developments. The first Whitepaper: “Apps Gone Rogue” was released just one week after PathCheck’s first meeting on March 19th, 2020. “Apps Gone Rogue” has now been cited by the CDC for best practices in contact tracing.

The founding member's efforts came against the backdrop of the increasingly worrying pandemic. After less than two weeks as a team physically together, the team switched to virtual meetings with the rest of the world. However, the virtual format proved to be no hindrance and the amazing team energy was sustained. It was then that the first version of the app was rapidly developed, called MIT Private Kit (and then later renamed COVID Safe Paths).

Within three weeks, the PathCheck team had over 100 volunteers and traction over the initial ‘MIT Private Kit’ app took off. At this point, PathCheck had been featured in Wired, The Wall Street Journal, Fastcompany, Popular Mechanics, The Times of India, IEEE Spectrum, Science. There was even a mention on Face the Nation, when Mayo Clinic’s CEO, Gianrico Farrugia, announced their ongoing collaboration with PathCheck.

One month in, PathCheck’s volunteer base grew to over 1,000 people. During this time, PathCheck’s mission also gained additional focus to include not only slowing the spread of COVID-19 but also enabling the re-opening of businesses and schools with its technology. As the pandemic raged on—through school closings, economic crashes, depleted healthcare resources, and rising social inequity—it became clear that the impact of the pandemic would be more far-reaching and devastating than the world was prepared for. The effects of the pandemic would necessitate restoration of the health of the population and of the economy. The PathCheck team understood that the world needed tools to support the resource-constrained public health officials to do their jobs.

Today, PathCheck comprises over 3,500 volunteers around the globe, and has open source code that has shipped over 1 Billion credentials through our extended network of 3rd party integrators! All of which point to the significant impact PathCheck has made and continues to make. Furthermore, the Foundation has turned its attention toward its post-pandemic strategy of building free, privacy-preserving, open source software and standards to harness computational power that supports faster and more efficient response to pandemics.

We know that global health crises occur every 5-10 years, often emerging in communities with the most health disparities who are underserved by public health agencies. As a result, health policies are reactionary - placing policy into effect well after the viral life cycle has begun; Digital tools can change this.

Read more about PathCheck's accomplishments in the Annual Report.